An Fun Filled Day at the Festival of Books

It was a fun day at the L.A. Times Festival of Books!

ANF Extra was there on the campus of the University of Southern California taking in all the sights, the authors we’ve met and friends who enjoy books. As you’ll see in the above clip, there was no shortage of writers present with diverse stories and information for the reading public. What you did miss and we couldn’t show you, were authors who didn’t have booths but hustled and talked up their works with passers-by.

Exposure is key at the festival – with a number of over 150,000 annually, this outstanding and largest literary event on the West coast is a must for authors who can’t afford to go back East and get involved with Book Expo America, for example.

Every author we’ve spoke with and met had a smile on their faces which means their day was a great one for them. Please take a look at the latest ANF Extra and find out. Next up; in the city of Carson, California at the Carson Community Center, it’s the Black Writers on Tour and it is next on our list. In the meantime, please enjoy the above clip. 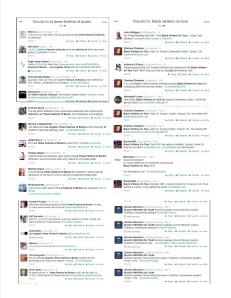 A tale of two literary events.

The Los Angeles Times Festival of Books – the largest literary festival on the West coast. Over 150,000 attend the two day literary celebration. It will take place on April 12-13 on the USC campus.

The Black Writers on Tour – one of the longest running literary conferences in the Southern California area. In years past, the tour reached a crowd of 5,000-6,000. It will be held a week after the Festival of Books, April 19 inside the Carson Center in the city of Carson, California.

What aspiring authors should also take from this is to look at the different or same users promoting each event. What do you see as you click on the picture above? Who do you see promoting it? If one were a vendor at either event advertising their appearance, the advantage goes to the users on the left simply because it’s a) not the same people mentioning it on their Twitter feed and b) not only are they publicizing their particular event but are collectively raising awareness of it to the millions of book lovers on the web.

This brings to mind a subject mentioned in this same blog last year (Commentary: Tweet, tweet!) about the power of social media via Twitter and how it can be used to advance information among the masses. However, when it comes to certain literary venues, there are those who ‘get it’ and those who also get it but choose not to use it when it comes to advertising and/or showing that word again, support.

Here is a quote taken from the article referenced above:

“Why must we spend so much time arguing online about which diva has the nastiest weave but won’t post about an upcoming book fair?”

So now you know. The question is where do we go from here?

The L.A. Times Festival of Books has a website, http://events.latimes.com/festivalofbooks

The Black Writers on Tour also has a website, http://blackwritersontour.com

We do urge everyone to attend both, but whether or not folks attend……that’s their choice.

In my downtime from publishing books which I haven’t done in over a decade, I’ve been revising my old novellas and short stories preparing for the day when I can release them one by one. During this time, the landscape of storytelling has changed. Before, a novel would feature one stand alone story with a strong character involved in a challenging situation which the plot has him or her succeed or fail. Nowadays, there is a shift towards more serialized storytelling in which the character deals with an issue in the plot, only to see it’s grounds for a much larger storyline set up over several books. Think Game of Thrones or Harry Potter.

For example, Robin Hood would have easily dealt with the Sheriff of Nottingham in the pages of a single book and that would be the end. In these modern times, there might be a call for an author to produce a series of novels of Sherwood Forest where that might be the theme and overall storyline featuring on the adventures of Robin, Friar Tuck, the sheriff, Maid Marian and even a rookie bowman encouraged to join in the fight. Taken another way, there might be novels written of the past of Robin Hood, his many clashes with the sheriff and even his protege taking up the cause of robbing from the rich and giving it to the poor. Before anyone claims ignorance on my part, I can admit there has been serialized novels in the past if one has read any of the Clancy or Ludlum books. The latter I haven’t read but have been told many times by my customers who stopped by the mobile bookstore I used to operate. However, this is not the point of this entry. Creators have the right to focus or expand on a story they see fit. It has to be said when it comes to supply and demand, should an individual writer go this route?

I write this because I’m sure questions like the one above is what a new or aspiring author would ask when they’re starting for the first time with the manuscript they built up enough courage and focus to write. Personally, it is up to that author to write a series or stand-alone story however they see fit without having to conform to the industry’s ‘standards’. The literary journey can be a lonely one at times, but with their ears filled up with so many voices of advices and rules, watching every precaution and warnings from veteran writers, it is easy to see why an aspiring author would hesitate in producing their work. Look, no one can write like J.K. Rowling and come out with a Harry Potter series. Perhaps the aspiring author is a bit like Alexandre Dumas – only writing enough creative content to produce a Three Musketeers or Man in the Iron Mask (it should be said that Dumas did write the Four Musketeers, but that sequel was as far as he went, to this author’s knowledge anyway). The point is that producing a series or stand alone novel has to be the discretion of the aspiring author. If they have a long term storyline for their characters, or if it’s centered around a theme taking course over several books, they should do it. Even my wife who has written one novel, is working on a sequel but she doesn’t feel obligated to develop a series of novels based on her characters unless she wants to. It’s her decision, not held by a traditional publisher or agent, it’s all hers.

Of course, we all love to follow trends as writers in this business so we honestly feel what works for Author T will work for Author X, Y, Z. Not every formula for success or recognition is the same. Just because a favorite author is writing a series, an aspiring author shouldn’t feel pressured to follow after their idol. Again, it is the author’s discretion to determine what types of stories they want to write about and whether or not they have the vision to see the long term, all-encompassing storyline that will keep their fans anxious to buy the next book when it comes out. This trend isn’t limited to books; it’s also displayed in current movies and television shows as well. Faced with this changing landscape in storytelling, an budding writer can feel they have to keep up just to ‘stand out’.

Aspiring authors shouldn’t bow down to ill-perceived peer pressure, they should create independent works that captures an audience. A writer should write a tale they should enjoy. If it takes place within a single book and goes no further, it’s perfectly acceptable. There is a world of readers who yearn for good stories, and if it takes only one novel to fill that need, so be it.